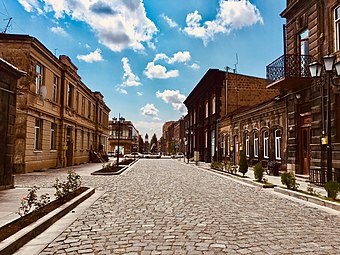 Gyumri (Armenian: Գյումրի, pronounced \[ɡjumˈɾi\]) is an urban municipal community and the second-largest city in Armenia, serving as the administrative center of Shirak Province in the northwestern part of the country By the end of the 19th century, when the city was known as Alexandropol, it was one of the largest cities of Russian-ruled Eastern Armenia with a population similar to that of Yerevan It was renamed to Leninakan during the Soviet period

Discussplaces Where you have someone to talk to about Gyumri

Featuring unique information and insights to help you make travel plans for Gyumri, including safety and security. Before you visit Gyumri, immerse yourself in discussions about all that a destination has to offer.
Experiences with history, nature and food will make your journey unforgettable. Learn about Gyumri's people and culture - the flavor that shapes its music, art and stories. A new way to explore the world and see different perspectives. Find tourists, locals, experts and influencers sharing content relevant to your interests.