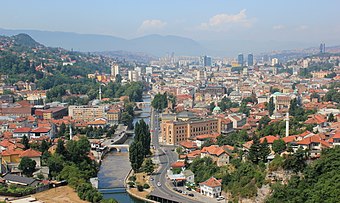 Sarajevo ( SARR-ə-YAY-voh; Cyrillic: Сарајево, pronounced \sǎrajeʋo\:; see names in other languages) is the capital and largest city of Bosnia and Herzegovina, with a population of 275,569 in its administrative limits The Sarajevo metropolitan area including Sarajevo Canton, East Sarajevo and nearby municipalities is home to 555,210 inhabitants Located within the greater Sarajevo valley of Bosnia, it is surrounded by the Dinaric Alps and situated along the Miljacka River in the heart of the Balkans, a region of Southern Europe

Discussplaces Where you have someone to talk to about Sarajevo

Featuring unique information and insights to help you make travel plans for Sarajevo, including safety and security. Before you visit Sarajevo, immerse yourself in discussions about all that a destination has to offer.
Experiences with history, nature and food will make your journey unforgettable. Learn about Sarajevo's people and culture - the flavor that shapes its music, art and stories. A new way to explore the world and see different perspectives. Find tourists, locals, experts and influencers sharing content relevant to your interests.