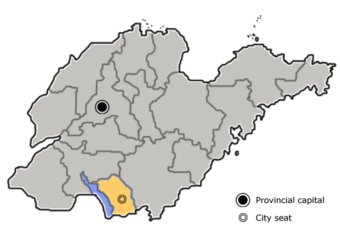 Zaozhuang (simplified Chinese: 枣庄; traditional Chinese: 棗莊; pinyin: Zǎozhuāng) is a prefecture-level city in the south of Shandong province, People's Republic of China Since January 2019 (after the Laiwu prefecture got incorporated into Jinan prefecture), the smallest prefecture-level city in the province, it borders Jining to the west and north, Linyi to the east, and the province of Jiangsu to the south The Battle of Taierzhuang occurred in the city during the Second Sino-Japanese War in 1938

Discussplaces Where you have someone to talk to about Zaozhuang

Featuring unique information and insights to help you make travel plans for Zaozhuang, including safety and security. Before you visit Zaozhuang, immerse yourself in discussions about all that a destination has to offer.
Experiences with history, nature and food will make your journey unforgettable. Learn about Zaozhuang's people and culture - the flavor that shapes its music, art and stories. A new way to explore the world and see different perspectives. Find tourists, locals, experts and influencers sharing content relevant to your interests.