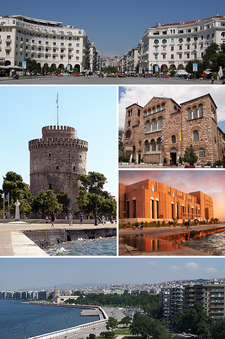 Thessaloniki (; Greek: Θεσσαλονίκη, \θesaloˈnici\:), also known as Thessalonica (English: ), Saloniki or Salonica () is the second-largest city in Greece, with over 1 million inhabitants in its metropolitan area, and the capital of the geographic region of Macedonia, the administrative region of Central Macedonia and the Decentralized Administration of Macedonia and Thrace It is also known in Greek as η Συμπρωτεύουσα (i Simprotévousa), literally "the co-capital", a reference to its historical status as the Συμβασιλεύουσα (Simvasilévousa) or "co-reigning" city of the Byzantine Empire alongside ConstantinopleThessaloniki is located on the Thermaic Gulf, at the northwest corner of the Aegean Sea

Discussplaces Where you have someone to talk to about Thessaloniki

Featuring unique information and insights to help you make travel plans for Thessaloniki, including safety and security. Before you visit Thessaloniki, immerse yourself in discussions about all that a destination has to offer.
Experiences with history, nature and food will make your journey unforgettable. Learn about Thessaloniki's people and culture - the flavor that shapes its music, art and stories. A new way to explore the world and see different perspectives. Find tourists, locals, experts and influencers sharing content relevant to your interests.