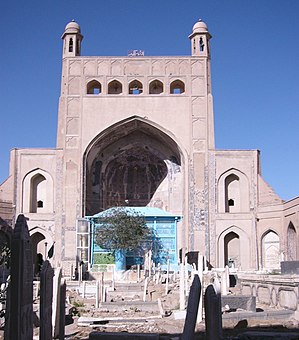 Herāt (; Dari/Pashto: هرات) is an oasis city and the third-largest city of Afghanistan In 2020, it had an estimated population of 574,276, and serves as the capital of Herat Province, situated south of the Paropamisus Mountains (Selseleh-ye Safēd Kōh) in the fertile valley of the Hari River in the western part of the country An ancient civilization on the Silk Road between the Middle East, Central and South Asia, it serves as a regional hub in the country's west, and its historic Persian influences has given it the nickname as Afghanistan's Little Iran

Discussplaces Where you have someone to talk to about Herat

Featuring unique information and insights to help you make travel plans for Herat, including safety and security. Before you visit Herat, immerse yourself in discussions about all that a destination has to offer.
Experiences with history, nature and food will make your journey unforgettable. Learn about Herat's people and culture - the flavor that shapes its music, art and stories. A new way to explore the world and see different perspectives. Find tourists, locals, experts and influencers sharing content relevant to your interests.