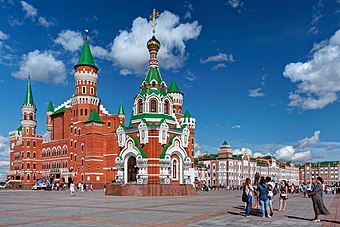 Yoshkar-Ola (Mari and Russian: Йошкар-Ола) is the capital city of the Mari El Republic, Russia Yoshkar-Ola means “red city” in Mari and was formerly known as Tsaryovokokshaysk (Царевококшайск) before 1919, as Krasnokokshaysk (Краснококшайск) between 1919 and 1927 (both after the Malaya Kokshaga River, which runs through the city) and Charla (Чарла), by the Mari people Yoshkar-Ola was established as a military fortress in 1584, following the Russian conquest of the Mari-inhabited regions of the Volga and its tributaries

Discussplaces Where you have someone to talk to about Yoshkar-Ola

Featuring unique information and insights to help you make travel plans for Yoshkar-Ola, including safety and security. Before you visit Yoshkar-Ola, immerse yourself in discussions about all that a destination has to offer.
Experiences with history, nature and food will make your journey unforgettable. Learn about Yoshkar-Ola's people and culture - the flavor that shapes its music, art and stories. A new way to explore the world and see different perspectives. Find tourists, locals, experts and influencers sharing content relevant to your interests.